After Friday's post with those images of the mural I photographed last June in Bordeaux, I did a bit more research and found this video of "The Making Of" -- which shows both the in-studio work (cutting stencils, planning design, etc.) and also the demanding on-site work with the ladders and mechanical lift. Some of the video is filmed from a drone with offers a fabulous view of the mural in context. You can see over the roof of the building to surrounding buildings, the Garonne River in the background. . . 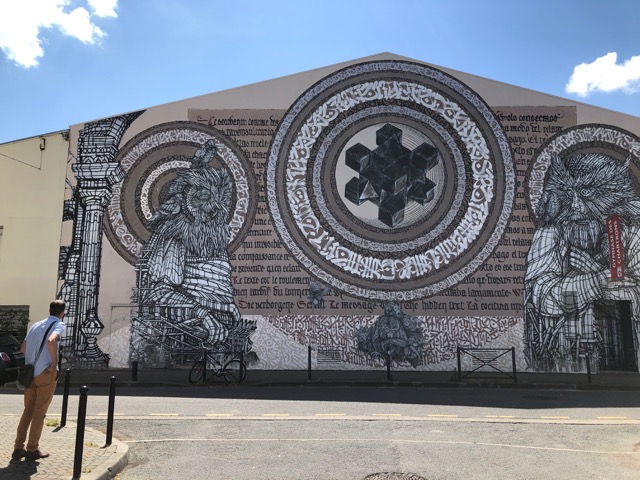 And on artist MonkeyBird's Instagram feed, I found this post which includes a statement about the ideas underlying the work:
This work creates a relationship between geometry and text as a poetic knowledge. In one hand, Monkey Bird with their Stencils, alludes to the ancient ‘platonic solids’ and creates a series of unfinished characters like ‘guardians of knowledge’. In other hand, Said Dokins, use his own calligraphy style and medieval letters to talk about the idea of eternal return, inscribing texts that refer to the possibilities and limitations of philosophy and the importance of the text as a legacy of the consciousness through time. These reminiscences of the old antique prints of Wenzel Jamnitzer, Renaissance statuary and medieval forms of calligraphy and the appearance of unfinished buildings or in ruins, creates several reflections about our human condition, where the awareness and knowledge are in a state of permanent construction. 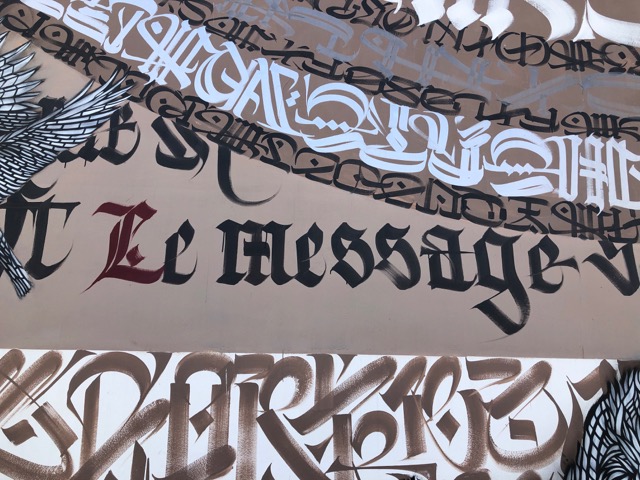 And I did a teeny bit more research to find that Wenzel Jamnitzer was a contemporary of Albrecht Dürer. Like Dürer, he lived in Nuremberg where Jamnitzer was known as goldsmith, printer, and inventor of scientific instruments. This link will take you to copies of pages from his work on the "platonic solids' mentioned in the artists' statement above . . . 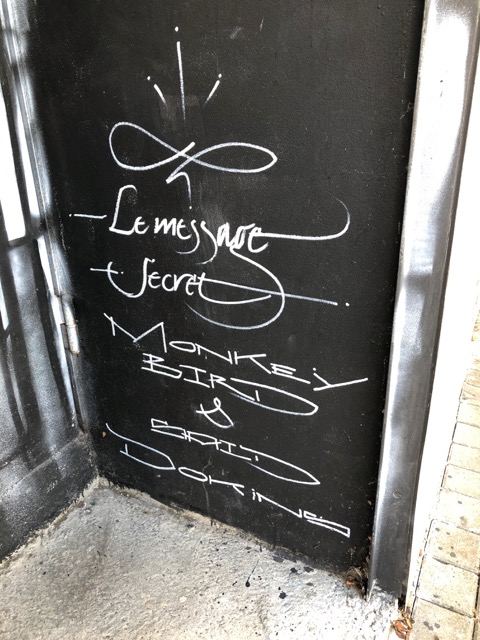 Meanwhile, back in Vancouver. . . here's a mural I pass regularly, about a kilometre from my home. It's also a collaboration -- between Sonny Assu and Mark Olinger. Sonny Assu is a First Nations artist who mixes Northwest Coast indigneous design elements with pop culture iconography -- paintings, sculptures, mixed-media installations.  Mark Ollinger's art grew out of a woodworking background, and you can see the influence of that sculptural or 3D work in the complex textures of the brightly coloured maze. 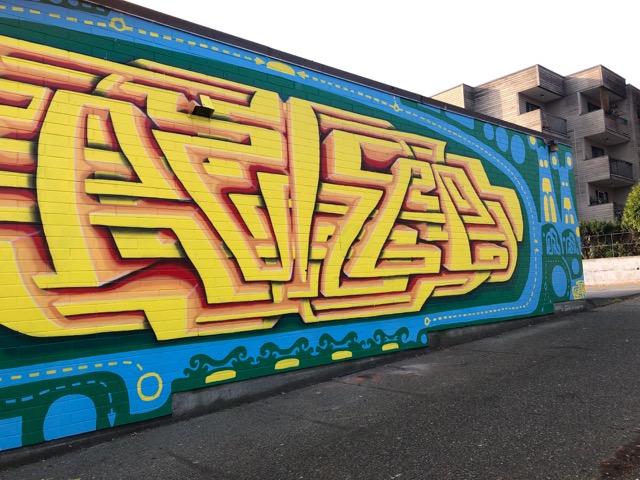 As I say, I've walked by this mural often, but last week, walking to meet a friend for tea, I noticed an interpretive sign and crossed the street for a closer look. 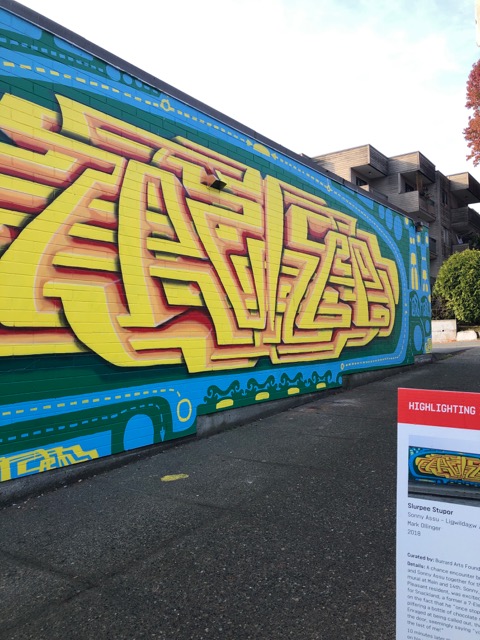 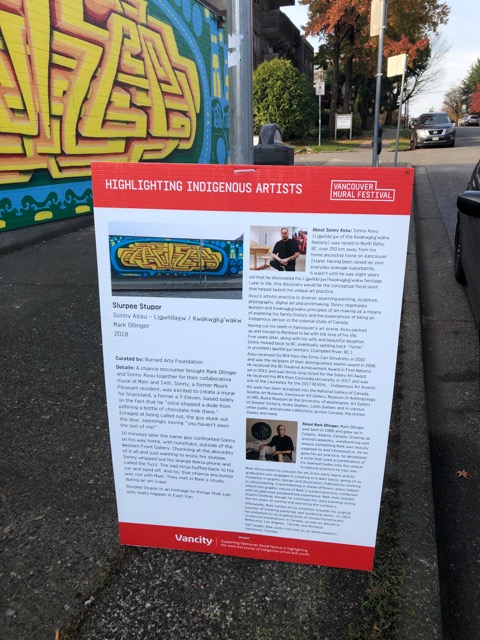 You should be able to tap or pinch-stretch this larger -- and I think you might find the text interesting. What struck me as a link between the Bordeaux murals and "Slurpee Stupor" here in Vancouver is that in both cases two artists collaborate, bringing together different styles in a surprising cohesion. The two murals also share a revisiting and revisioning of (an) art history's past. I see references in both to geometry's mysteries, to metaphysics -- and both grapple --if playfully and in an unexpected genre or medium -- with serious questions about how we see the world. 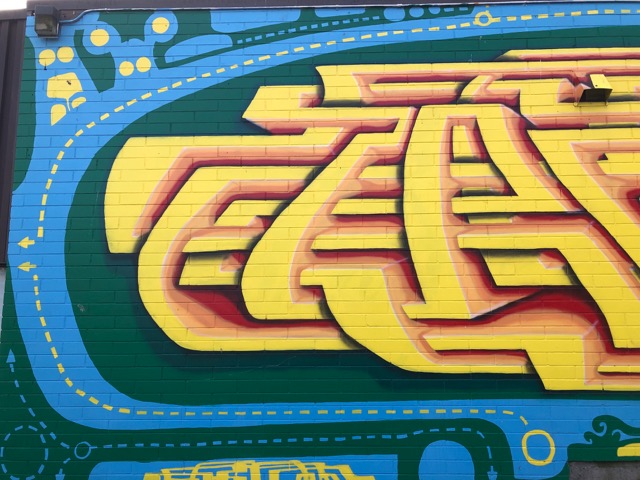 Mostly, though, they do what that old kids' game tried to make us do. Remember? . . . Made you look! . . . And I love that, love that they can sometimes stop us in our tracks, sometimes just slow us down a bit, sometimes make us think, sometimes make us smile. And they're not sequestered in a gallery or a museum but out there for everyone to see. No price of admission. . . .

Now, what say you? Comments always welcome, as you must know by now. . .


Posted by materfamilias at 2:20 PM

Oh gosh, I still struggle with street art. Maybe because what I've seen here looks to me like pretty bad, vandal-like stuff. I also recoil from geometric, 3D patterns - especially if large scale - so the Vancouver mural you've posted is very challenging and disturbing for me to look at, verging on physical nausea. Must be something in my brain! My family would tell you I don't do numbers, far less geometry. The Bordeaux mural is easier for me to look at tho I would probably not linger in front of it. Perhaps if I start with more literal forms of street art that would be best. I'm not at all challenging your appreciation of street art, it just seems to be an area that I can't find a connection with. I will have to see if there's any in Edinburgh that appeals.

We don't all like the same thing, obviously, and I understand your discomfort. At least, you're "still struggling" rather than dismissing wholesale. Some street art I've had to educate myself about, some I've found immediately appealing. It helps that there is so much critical attention paid to the media/genre now so that I can read art criticism about it, learn what to look over. . . I'm also pretty determined to find whatever there is to like in the new-to-me and the different and the challenging, just for the benefit of staying engaged -- and looking at the street art through my grandchidren's eyes occasionally helps.
The large geometric 3d patterns don't bother me, but I've never had motion sickness other than one bout of seasickness in very rough seas. What do you think of Bridget Riley's work? Same effect?
And similar question -- and I hope you don't take this as my challenging your aesthetics; I'm just delighted someone read the post and is engaging with it, especially someone so astute and thoughtful -- do you like, or appreciate, any of Basquiat's work as seen in a gallery rather than on the wall of a building?
Mostly, just thanks so much for taking the time to respond here. It means a great deal after the hour or two spent on putting the post together.

I knew that it has something to do with Dürer!
Interesting!
Dottoressa

Well, of course Dottoressa -- you're so smart! xoxo

Sorry for delay - have been in Edinburgh! Bridget Riley's work is impossible for me - same nausea effect. Reflecting on it, this may be because I have Menière's Disease, with the balance/nausea issues that go with it. There was a Harry Potter street art that I liked in Edinburgh, probably because it was very representational. I will try to find it on IG and DM you. So you see, I am at the non-intellectual stage of street art appreciation! BTW, Bridget Riley had an exhibition in Edinburgh this summer at the National Gallery. It's now moved to the Hayward in London until January - you could hop across on the Eurostar if you wanted to see it!

Linda B: This is when I was in Edinburgh last year, and I have such good memories of the city! I do hope I get back some day. As for the Riley exhibition, I wish! but the only "hopping" I will be doing is the all-day train trip to Rome. And then the ride back to Paris. The joys of having an expat g'daughter . . .