One of you clever readers (I've just looked back to check: it was Barbara of Coastal Ripples) commented at my post of two Mondays ago that she's adopted a more relaxed schedule and pace for Mondays. That after what tends to be the busy-ness of a family weekend, Mondays offer a chance to take stock of the week ahead before the pace picks up again with a plethora of activities.

Barbara's approach seems wise to me -- especially the notion of building in some stock-taking time.-- after coming out of a weekend that included
- catching up, mornings and evenings, with a good friend who stayed with us while teaching a painting course in town
- our Saturday morning Italian class (for two and a half hours, our poor little brains straining to keep up)
- a couple of hours cycling to a favourite spot on Sunday morning ( little photo-story about that here if you're interested)
- a Stretch class late on Sunday afternoon. So good. . . .

I find this idea of stock-taking especially relevant right now as I've got my new workspace set up and have almost finished sorting a chaotic archaeology of personal and family artifacts. Too many ideas careening around my cranium. The ideas and I deserve some quiet time, I think, while I imagine credible ways they might take form. How will I find time for them amidst the French and Italian classes and the fitness time and the beloved grandkids time and the novel delight I've found in retirement of making time, once again, for friends?

Interestingly, I saw something on Instagram this morning that struck me as relevant to these questions.  An artist had suffered a setback via a technological problem which meant that her plan for making prints available was now going to be more trouble than it was worth. She'd wisely resolved to stop fussing, let that series of prints (the first she'd planned to make available) go and look forward to digitizing her next series instead. All laudable, but what I was less sure about was the Aphorism scripted in one of those photogenic fonts in a pretty colour against a trendy-neutral background:  "Don't Look Back; You're Not Going That Way." There was probably a very cute GIF as well. . . .

Obviously, this advice makes sense for the context (although I suspect that some looking back to say whether, and how, the technological problem could have been avoided might not be amiss). But these days, for me, are feeling very much about consolidation of my past as something like inspiration for, and guidance of, my future. Back to the Future, as it were. . .

Not sure if these musings make much sense to you or resonate at all. But going forward, I'm hoping to include some rear-mirror views.

For example (and to keep my Monday morning simpler by tucking in some ready-made content), here's something you've already seen, augmented by a new iteration. . .

Back in July, I showed you the (unpainted) sketch of a Citroën 2CV we'd seen a month or so earlier,  parked against a stone wall on a very rainy day in St. Emilion. 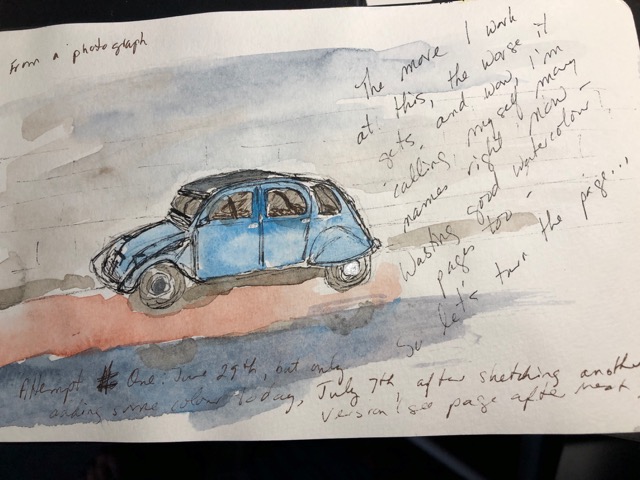 I was frustrated at the sketch (which was done from a photo taken that rainy May day in Bordeaux), but determined to keep trying. I added watercolour, and then I turned the page of my travel journal to try again. 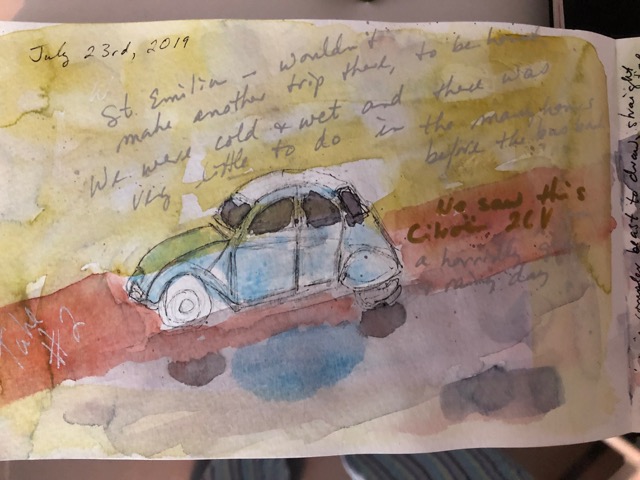 Honestly, I didn't think it was any better, but I thought a bit about how naïve it was to think I'd "get it" on a second try. I thought about the "10,000 hours" that supposedly are needed to build mastery of a craft (never mind where the art, the vision, might come from), confronted the 9, 872 I probably still needed to accumulate, and turned another page. Not before adding watercolours, though, and this time I decided I could play with those.  Since my Citroën's a very long way from photorealist, why not take liberties with the background colours as well.

And finally, I had the happy notion to incorporate some of the comments my readers made about this iconic French car.  So I drew yet another car, not obviously better than its predecessors, but at some level the looking and assessing and mark-making is carving out neural pathways, no? May I hope? 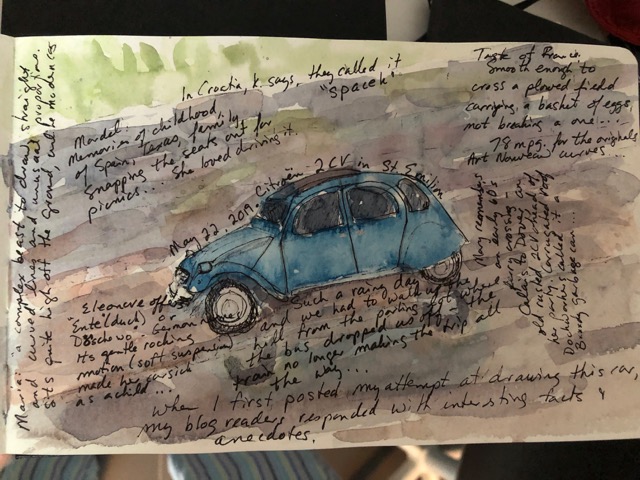 For this version, I tried to mix my colours as close to those in the photo as possible, but I didn't bother with detail beyond that of the car. . .

And because you inspired me, I'm sharing all three pages as I consolidate my thoughts this Monday morning, digging back through my archives as I move forward.

Thoughts? Do you also turn to the past as inspiration for moving forward? Or do you tend to think there's too much danger of getting stuck? (And if you'd argue that it's hardly an either/or situation, I'll admit I'm with you).

Meanwhile, here today, it's as rainy a day as it was back in St. Emilion last May. A good day to stay inside, consolidate, relax. . . and read (I've just begun Elizabeth Gilbert's City of Girls, and so far it's very entertaining). Some French homework to do first, so I'd better sign off.
Your turn now -- the mic's open.
xo

Posted by materfamilias at 11:12 AM

The important thing, when returning to the past for inspiration, is to try it different ways and not to just repeat the same thing over and over.
Your second one gets the silhouette best, I think. The roundness of the roofline. It's tricky with that third, back window.
I love your musing posts....

Well firstly thanks for the mention. Hopefully ‘chill out’ Monday’s will work for you. What a synchronous post. Your wonderful 2CV is identical in all ways to our very own 2CV. We’ve had it since 1989 and it’s seen much restoration since then; still going strong. Our middle son wants to inherit it! As for looking back...for me it’s crucial in order to move forward. Learning from past mistakes or building on tentative steps. To not look back would create a very indifferent future. Hope your week goes well. B x

The past. Well, you can look at it or not look at it, but it's coming with you as you move forward, right?

Your musings always resonate. I always wonder why we expect perfection from ourselves, and cut some slack for others.
We are in France, just arrived a few days ago. Jet lag slowly leaving. Let the adventure begin...
Ali

Phew, so much to think about in this post. I'm off to climb a hill just now, and will think about it on the way. Just to say tho - that linguistic stretching is tiring but feels SOOOO good and I miss it so much here in the country. Stretching classes would also be good - again one of the perks of city life, to have this nuanced range of classes. In a bit of a 1970-2000 time warp here - 'keep fit' and kettle bells are on offer, (but not taken up by me!) but I have sourced excellent Pilates. But stretching sounds so....finely tuned.

I'd be delighted to have any and all of your 2CVs in my (hypothetical) sketch book...

Taste: Thanks! Yes, I think that's key, to try it differently. For me, it's generally scooping up from the past what i see from my current perspective, so it's inevitably different.
Barbara/Ripples: You have a 2CV and you've had it for 30 years!! Marvellous! So cool! Very nice image of the past, moving forward ;-)
Georgia: Yes! So tiring! My French class finishes at 8:30, so by the time I've walked home, it's lights-out. The Italian's a bit trickier, finishing at noon, but then . . . perfect timing for lunch followed by a nap, right?
Ali: I wondered if you were heading back -- we really want to get our travels onto a fall schedule again -- a splendid time to be there. Enjoy!
Linda: I think there's been a resurgence of interest in kettle bells, although somehow I've managed never to heft a single one. You're very fortunate to have excellent Pilates nearby -- I loved the (Reformer) classes I did, twice-weekly, for about 10 years and if I could find their like here in the city I think I'd take them up again -- except that the prices for classes in the city are shocking! (Your hill climb looked amazing!
Ceri: Aw, thanks. . .

I have found it good to at least try and schedule a "personal weekend" if you will, during the week. Especially since my husband is still working. And looking back, I mean, that's the true luxury of retirement I think. Reflection, and recreation.

Frances, there's such a charming, appealing quality to your sketches that always makes me smile. #1 feels the most "in the moment," but #3 with the comments is really fun too.

I hear you about Mondays. I still haven't completely let go of "work mode," tending to get up and dive right in. I still tend to feel the habitual Sunday evening anxiety (?) letdown (?) . I'm wondering if this will ease up to some degree once Doug retires?

Lisa: I like this idea of a personal weekend. My problem tends to be that I keep forgetting that activities I enjoy (especially if they're social) tire me as much as what I once called "work"
Susan: That's so kind of you to say about my sketches, thanks!
I'd say that given how productive you still are -- your blogging and social media profile in general -- the structure established throughout a career working in a corporate environment probably serves you very well. Not so much the Sunday evening anxiety perhaps. . .