Since our first visit to Bordeaux eight years ago, I've been fascinated by the city's  wealth of mascarons.  Apparently, there are some 3000 of these faces--the majority, perhaps, realistic, but many fantastic or comic -- carved from stone as adornment to the architecture here, a few dating from the 16th century, a few more from the 17th, and then a exponential flowering in the 18th.

Here are a few elegant examples from buildings bordering on Le Jardin Public -- the mascarons are the faces you see above each of those three arches. . . 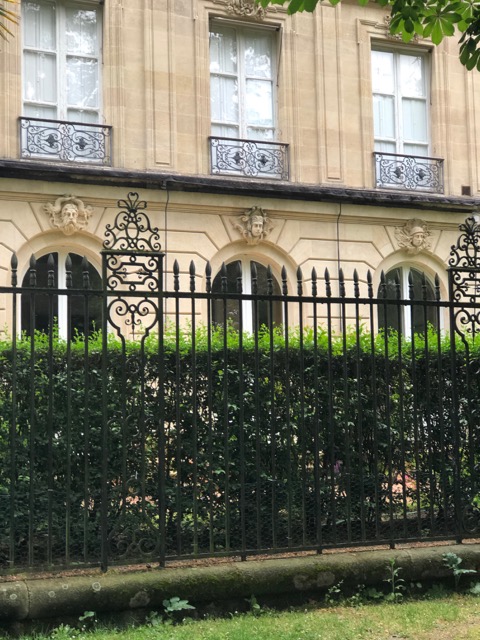 Just down the street from where we're staying there's another building whose facade has been recently cleaned, and the six mascarons lined up along its front have been demanding my attention for weeks now. But I kept trying to ignore the urge to draw them because, honestly, I'm a bit shy about standing across the narrow street, on a narrow sidewalk next to a fairly busy intersection, and sketching. Not only shy, but also aware that I will be a much harsher critic of my own work if I feel other eyes on it.

Still, I really wanted some of these faces in my sketchbook. So I prepared a page with six small circles, pre-painted with some wet-on-wet watercolour, and then I set out my clothes and gear for a quiet, early exit in the morning.  . .

I wasn't as early as I'd hoped (the good news there is that I've been sleeping a bit longer lately), but there weren't too many passers-by at 8 on a Sunday morning, and the rain mostly held off until I'd got these six down on the page. The numerals above refer to the order in which I drew them -- except for that circled "12" which is the street address that sits above #4's head. . . . 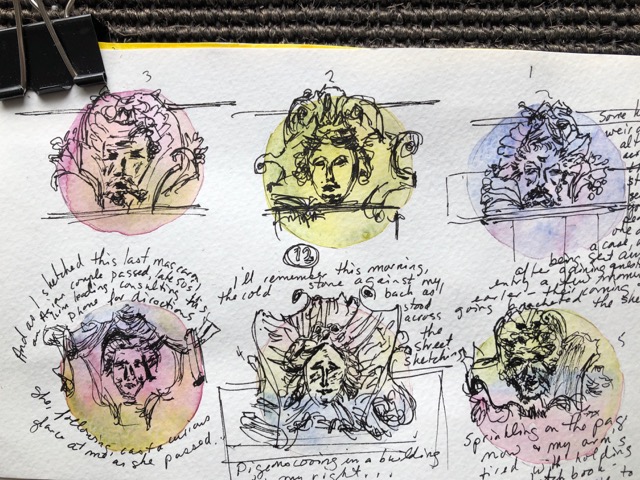 I'm not displeased with this page, although I can already see how I might improve were I to try this again -- Sketching standing up, my only tool the Micron pen, my arm tiring, allowing only 3 to 5 minutes for each mascaron, I nonetheless began to see how much depended on seeing the negative space, using the shadows of the bas-relief to show the features that rose out of them. Were I to try more of this, would I develop more facility in showing those shadows? Could I become better at hatching with the Micron on this small scale? Would I be better off using a pencil?

That's the beauty, though, of keeping the focus on process, not product -- or Process as Product? For me, the sketchbook becomes not only a record of my travels but also of my progress with mark-making. And if you've ever tried it, you'll know how much this process gathers in so many sensory impressions of the moment, distills their memory and imbues the sketch with them, so that I recall the light sprinkles that began to fall as I was nearing completion. I hear the pigeons cooing somewhere to my right, see again the altercation as three youths tried to fake entry to a building across the street. feel on my back the cold stone of the building I leaned against while drawing.

What a relief to have got myself back to this acceptance.  As I mentioned obliquely back here, I let myself get frustrated and then discouraged a few weeks ago, over-reaching perhaps, and then being overly critical.  Since then, though, I was inspired by this technique of preparing small, pre-painted "frames" on the page and then finding a suitable subject to draw in them. Somehow, setting those parameters offers a kind of security, and although the paint colour is random, not particularly suited to the subject, it lends some cohesion and energy to the page.

I'll show you another page later this week when I take you back to Rome to see where that walk ended. . . Meanwhile, the change I've made to the Comments feature seems to be allowing more of you to leave a response, so if you're so inclined . . . You know I always enjoy hearing from you.

Posted by materfamilias at 2:27 AM

I 'hear' in your voice that this trip is providing you with some time and space to think things out, gently pull back the reins of self-criticism, find pleasure in your sketching and even sleep a little better. A vacation in the best sense of the word.

I think those little painted circles are brilliant. I wonder if their preset parameters kind of push away the fear of the blank page. Of course I'm seeing that through the lens of my own experience. The blank page thing has always intimidated me. When I'm starting a new blog post, I find it much easier to write if I start with an idea, then choose my pictures, then fill in the spaces. If I were to analyze that process...which of course I do... I'd say that while I'm choosing shots I'm refining and building a story in my head, then all of a sudden I'm ready to write.
So happy that the sketching is going well. The creative process can be wonderfully interesting and engrossing. I hope you're having as wonderful a trip as it seems to us over here.

Crossing my fingers that this will work - if so, I'm very glad to have the ability to comment again!

Very much enjoying reading your travel posts, as always. Your artwork will be the ultimate souvenirs, the courses you have taken have been a very sound investment!

hostess of the humble bungalow said...

I noticed that your blog says “not secure” in the header when it loads? I am not sure exactly what that may mean but it could be related to your comment issue.
Sleeping better sounds like a wonderful gift! Your relaxed approach to travel, a peaceful place in which you can soak in all the beauty and those tasty healthy meals may all contribute to this bliss!

I've learned a new French word today; I've never come across the word "mascaron. " I was half expecting a post about cookies!!! I hope this exercise has silenced your inner critic for a while - the sketches are stunning - at first glance very elaborate, then a closer inspection reveals the individual details of each "mascaron."
Frances in Sidney

Those little "frames" are like little thought bubbles almost, capturing a minute and an imagine both.

Mary: I think you're right. . .
Sue: That's exactly what they do. I don't have to confront an entire page and there's a sense that if I "mess up" one of the small frames, there's always the next one. . .
Patricia: So glad to hear from you! Worth the change to include a voice like yours -- been there almost from the start, right?
Lesley: I've changed the setting to "https" -- but I don't think that would have been the problem as I didn't have that switched on when I used the Embedded Comments. It didn't seem necessary to me as no one's exchanging sensitive information here. . . As well, you have it on yours and you've had problems with readers being able to leave comments. Who knows? This fix seems to be working for now, but I really liked the Embedded Comments. Ah well. . .
Frances: I know, I made the same connection (with the confection!) when I first heard the word. You're very kind about my rendition of them (notice, though, I didn't include a picture of the originals for comparison ;-)
Lisa: Nice metaphor -- I like that!

Would you feel self-conscious if you were standing there making a few impressionistic notes in writing about the scene in front of you? Do you have more of an inner critic for your art than for your writing? And if so - why?

I’m very taken with the mascarons Frances. Your sketches are evocative and I’m sure they capture the feel of each face. Perhaps they are meant to guard their buildings, watching over the street while the occupants are out. I like the technique of putting a colour down first then doing the sketch on site - very clever and pleasing, Maria

Me too, Sue. Somehow the images provide a structure on which to hang the words.

Love these sketches and delighted that comments from my phone seem to be working now as I find myself firing up my laptop less and less.

I am so enjoying following your European summer.

It's wonderful that you have the time to sketch in Bordeaux. It is the process that matters but your product does provide visuals that words could never describe.

This type of travel is the best, just immersing yourself in a different culture, living your life at your own pace and absorbing...
Your sketching is quite impressive. I’m glad that you see what we see.
Ali

Linda: My inner critic is absolutely much harder on my art than my writing and I don't think that's surprising. My writing has all kinds of validation, including having taught university writing for years, but I'm a rank amateur at drawing and painting. My answer to my Inner Critic's "Who Do You Think You Are?" is quite different re those two activities.
Maria: Thanks for the kind words! The long architectural/cultural history of "mascarons" is fascinating (and there's an entire book about their history in Bordeaux which I'll review when I get back home where it's on my bookshelves)
Ceri: I'm also delighted! Happy your comments are coming through now.
Mme. Thanks -- I hope also that if there's enough Process, eventually the Product improves ;-)
Ali: This is the kind of travel for me, at least. I guess I see less of the big stuff, but perhaps more of the details.

these are so wonderful--good to hear that you are finding joy in the process!!